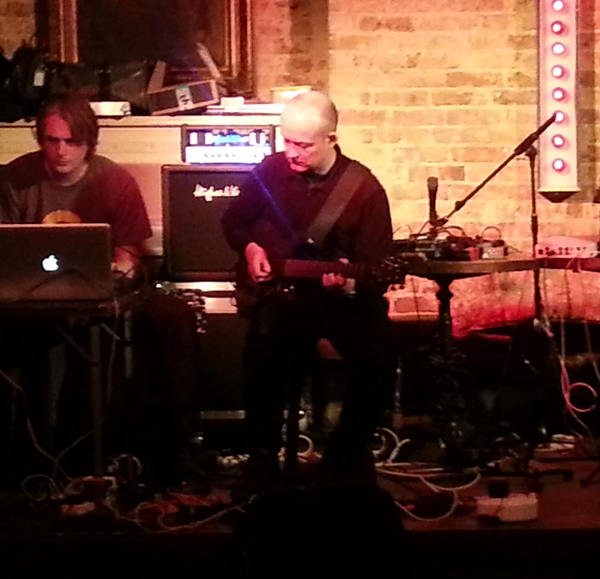 The music ranged from hypnotically beautiful to AvanteGarde improvisation.

We did our usual 20 minute set each, followed by another 20 minute set. In Darkroom’s final set Andrew and Michael invited me to join them on stage.

Beginning with me.
My first song was the first of a pair of love songs (since it’s February). The negative one called “I Don’t Love You”. I always feel slightly naughty singing this song. Especially the line “All you do is bore me to tears” It doesn’t just trip off my tongue, feels too mean but I think the problem with relationships is that we can put up with awful situations, here is the bald version of goodbye. The second song was Etusta, a song i have sung for very many years, it was originally written for a play about Joan of Arc, it has grown and developed into many versions.
AcouChristo.
He sang “Rise & Fall ” and “The Landing”
Ov Collective – Illi Adato and Graham Dunning.
Illi and Graham between them had a large array of unusual sound items, they make quirky collages of sound.
And finally
Darkroom
Absolutely love this first section, rhythm is punchy and irreverently fluid.

We had a break and then i began the second set with the second in the pair of love songs called “I Wanted you the Hear me Say It”
Acouchristo continued with “I Miss You Babe” a brave, personal, sad but strong song and “I Won’t Let You Down”. This was my favourite song of Acouchristo’s. Absolutely stunning. It builds slowly with this xylophone melody and Chris overlays layer after layer of the same phrases,,,.. and the reality of the words is driven home. Fabulous voice and original concept. (Inspired by a Dyson vacuum cleaner).
Illi and Graham continued with a sonically spacious and rarified palette of improvised sounds…. Very nice careful work where you could tell they were zoned into each other’s playing.
Darkroom and I improvised the last set of the day. This was a joy! It is so nice working with Darkroom, you never know what you are going to produce live, Andrew takes the sample, real time, and effects it there and then making a collage of vocalness over whatever else is also happening in the guitar and synths. (check expert sleepers for custom and niche market soft and hardware synths)