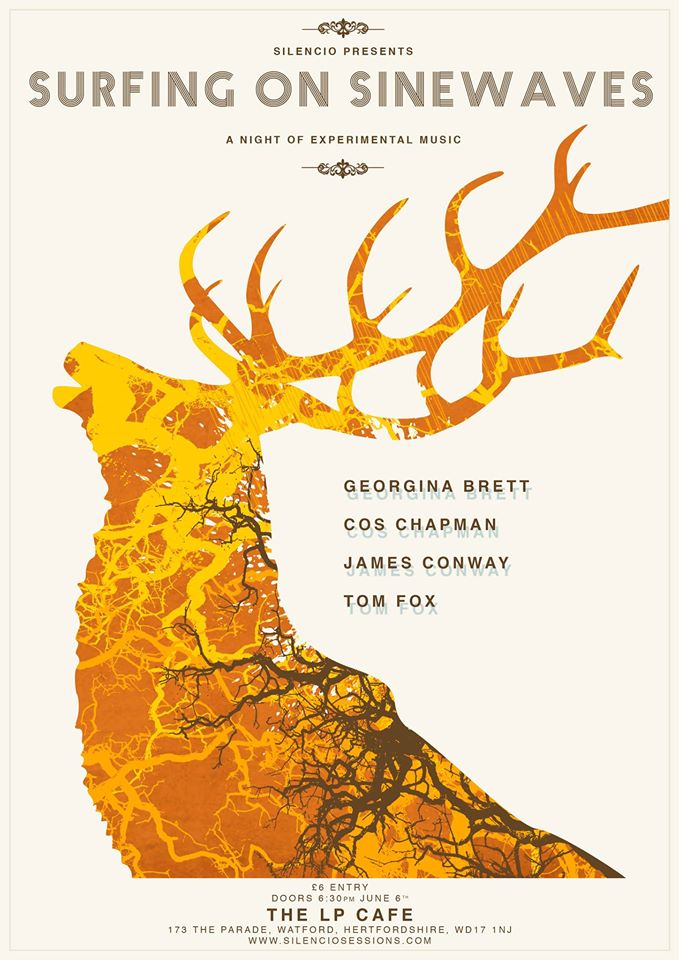 Silencio presents, Surfing on Sine waves.A night of Looping,experimental & electronic improvised music. Georgina Brett – http://georginabrett.co.uk/Georgina Brett’s music is created using her voice and effects pedals, creating instant choirs of sound, often in an hypnotic style. The point of this music is not only to captivate with extraordinary timing and melodic style but also to help the listener to relax, in our ever-increasingly fast world. Her double album Nonsense A and Nonsense B is of purely vocal works with no ‘deliberate’ words or lyrics. The albums show the voice as an instrument, and as a vehicle for emotional expression. “So much music produced in the World is made in order to make us feel something so as to manipulate us to buy or to follow.. this album let’s your thoughts be whatever they want to be.” The albums also play with the idea that we like to interpret, constantly listening for meaning instead of just listening. Intellectually, Georgina’s music adheres to some modernist and avant-garde principles but using harmonious parameters, instead of the more dissonant style of it’s post-WW1 and WW2 exponents. Georgina’s music is also gradually becoming a great vehicle for more experimental work, delving into expressive work which plays with the rich world of the media, politics, history, using matrices, semiotics and phonetics.

Cos Chapman – https://soundcloud.com/coschapman
I’m currently performing solo improvised electronics, playing guitar with punk-cabaret star Miss Roberts as part of “Rude Mechanicals”; creating sound-design for installation, theatre and film; and playing bass with sax driven post-punkers “I Am Meat”. I started my working life as an Oceanographer, at the same time experimenting extensively with sound, using modified reel-to-reel and self-built devices; after 12 years I went to Lancaster University to study Music, Technology and Theatre and while there I began to pursue my interest in cross art-form collaborations and soundtracks. I did my PhD in Electroacoustics at Anglia Ruskin Cambridge.