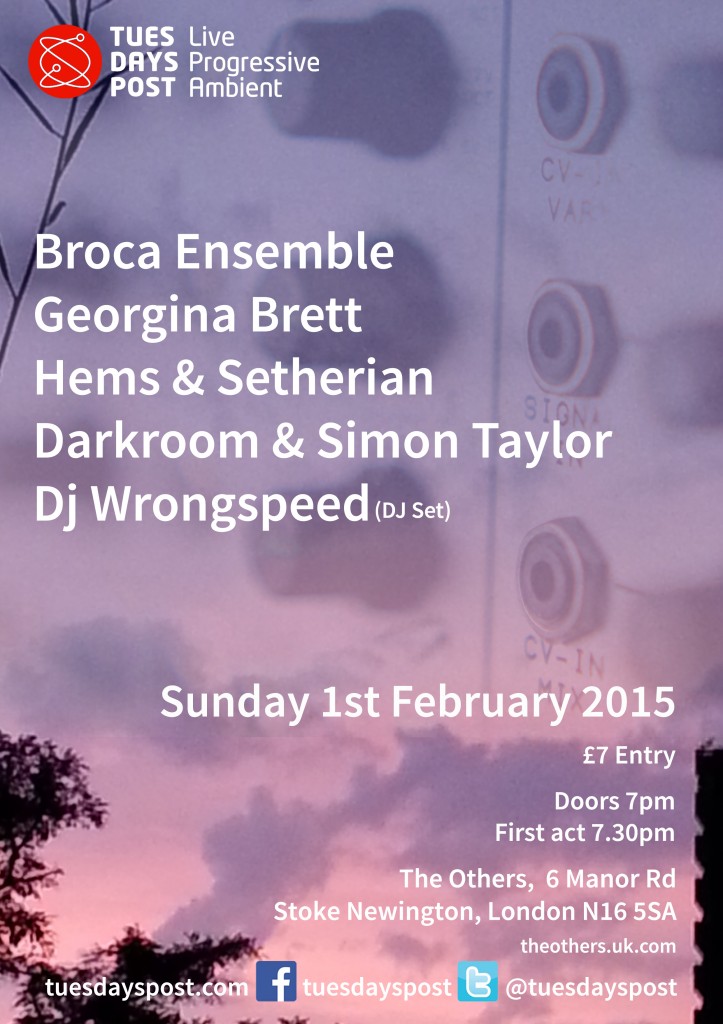 Formed in South East London in 2010, the group has grown from an original 4 members to now having, on occasion, up to 10 players. The music is largely improvised, devised from a set of simple rules, no piece is ever played the same twice. Influenced by the likes of Steve Reich, Terry Riley &amp; The Penguin Cafe Orchestra, the sound ranges from ambient soundscape to a guitar wall-of-sound.

Hems aka Henrique Matias will be playing in a duet with Setherian.. Henrique is a multi-talented composer, programmer and dj.. He specialises in Multimedia programming ( from internet things to Max/MSP and similars ), although not all his live music and performances sounds like computer music (sometimes he takes his drum machines and crazy things out of the house).

Setherian is DJ Seth aka Christian Zahn from Sao Paulo, Brazil. Though he is in his early twenties, he has been in the business for several years as both a DJ and producer. He describes his style as a mix between progressive, clubby elements and energetic full-on, and under his Setherian moniker he has already had releases on labels such as YSE, Com.pact and Ajuca Productions Glowing Flame Records from Macedonia (previously located in the U.K.)

Georgina Brett’s music is created using her voice and effects pedals, creating instant choirs of sound, often in an hypnotic style. The point of this music is not only to captivate with extraordinary timing and melodic style but also to help the listener to relax, in our ever-increasingly fast world.
“…Brett’s work is worth a particular mention for its ghostly, ethereal quality and thoughtful, delicate compositions…There is for me a continuum connecting to the Minimalists, of course – as a soloist, she’s doing some of the things that the Meredith Monk Ensemble did (minus the loopers), and there’s a feeling of the “discovered folk music” that Monk used in her work. Other moments have the quasi-Medieval sounds of Philip Glass — one track recalling the “Knee Plays,” other moments perhaps channeling Hildegard, in flourishes of modal monophony that underlie the writing. But this voice seems personal and intimate, centering on folk song round-style directness..” Peter Kirn CDM

The UK-based duo of Michael Bearpark (guitars) and Andrew Ostler (synths) expertly ride the line between luscious, old-school progressive rock and modern ambient electronics. At times reminiscent of early Tangerine Dream, with hints of Fripp and Eno, Darkroom creates clouds of sequenced synths, chewy grooves, and looped phrases to support a variety of acoustic and electric guitar melodies that twist and turn in surprising, occasionally aggressive, ways. Moody and well-orchestrated, this release takes you places. “The term “progressive electronica” is definitely an apt one for this duo. It’s accessible and addictive, while remaining expansive and exploratory. Quite a feat. I’ve been listening to these guys for nearly 20 years. Darkroom is a constant source of intrigue, wonder and invention.” Anil Prasad April 2014. This month they are joined by master trumpeter Simon Taylor.

DJ WRONGSPEED aka (Tom Wallace) Back from an epic trip round Asia. Tom may play sounds picked up along the way or we some classic Red Zero Radio or even some Pirate Flava. One of the original members of Resonance FM, Tom is a musical/sound pioneering adventurer… 🙂