Minny Pops SpaceheadsDarkroomGeorgina Brett & Hems£7 EntryDoors 7pmFirst act 7.30pmMINNY POPS http://www.minnypops.com/
Formed by vocalist/band leader Wally van Middendorp in Amsterdam in 1978, Dutch electro pioneers Minny Pops took their name from a primitive Korg drum machine. The band released several singles and a debut album, Drastic Measures, Drastic Movement, on independent Dutch label Plurex before joining Factory Records in 1980. Minny Pops’ association with the legendary Manchester label would see them produced by Martin Hannett, tour with Joy Division and later New Order, and become the first Dutch group to record a Peel Session. Singles including Dolphin’s Spurt, Secret Story and Time were followed by the acclaimed album Sparks in a Dark Room in 1982. The band released two further albums (Poste Restante and Fourth Floor) before splitting in 1985. A concert at the Paradiso in Amsterdam on 24 December 1981 would prove to be their last live performance as Minny Pops… …until 2012, when a series of gigs were undertaken in the UK, the Netherlands and Belgium. Also that year, Minny Pops recorded a 7″ single for Tim Burgess’ O Genesis label. After a pause to draw breath, 2014 has seen Minny Pops performing live once again.

Spaceheads are a cosmic duo of trumpet electronics and drums. Andy Diagram plays trumpet with a mobile phone stuck to the top with a fish slice and Richard Harrison plays drums with big bendy metal sheets stuck to the top. They create live looped layers of brass driven by flurries of free flowing funky drums.

Spaceheads were formed in 1990 and have developed a blend of electronics and sunshine fanfares over the course of ten albums, 3 EPs and much touring across Europe and the USA. Andy and Richard have achieved an intuition of what each is about to do next which makes their semi-improvised gigs a joy to behold.

Over the last two years Spaceheads have released two four track EPs on their own Electric Brass Records – Sun Radar and Trip to the Moon. Both received good press and radio play around the world. They release their first studio album in ten years this Autumn. Look out for it – “A short ride on the Arrow of Time” 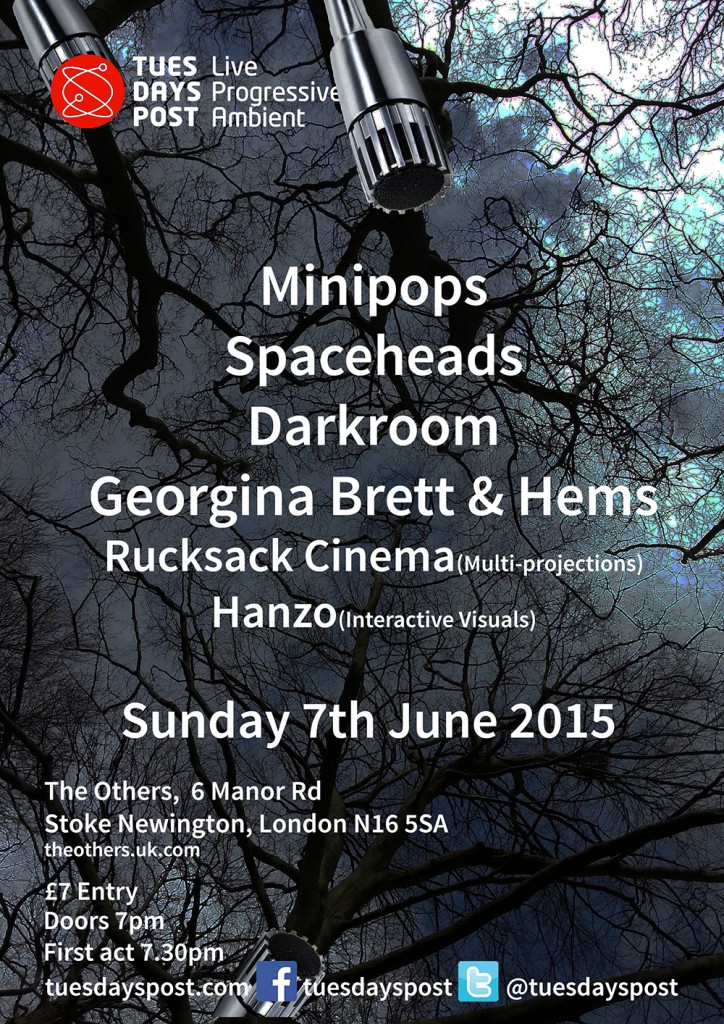 Spaceheads are joined by Rucksack Cinema who has an astonishing and almost preternatural ability to mix imagery with what is happening on stage as well as creating strange and wonderful atmospheres throughout a room.

The UK-based duo of Michael Bearpark (guitars) and Andrew Ostler (synths) expertly ride the line between luscious, old-school progressive rock and modern ambient electronics. At times reminiscent of early Tangerine Dream, with hints of Fripp and Eno, Darkroom creates clouds of sequenced synths, chewy grooves, and looped phrases to support a variety of acoustic and electric guitar melodies that twist and turn in surprising, occasionally aggressive, ways. Moody and well-orchestrated, this release takes you places. “The term “progressive electronica” is definitely an apt one for this duo. It’s accessible and addictive, while remaining expansive and exploratory. Quite a feat. I’ve been listening to these guys for nearly 20 years. Darkroom is a constant source of intrigue, wonder and invention.” Anil Prasad April 2014.

Hems Aka Henrique Matias will be playing live with Georgina Brett. Henrique is a multi-talented composer, programmer and dj.. He specialises in Multimedia programming ( from internet things to Max/MSP and similars ), although not all his live music and performances sounds like computer music (sometimes he takes his drum machines and crazy things out of the house).

Georgina Brett’s music is created using her voice and effects pedals, creating instant choirs of sound, often in an hypnotic style. The point of this music is not only to captivate with extraordinary timing and melodic style but also to help the listener to relax, in our ever-increasingly fast world.
“…Brett’s work is worth a particular mention for its ghostly, ethereal quality and thoughtful, delicate compositions…There is for me a continuum connecting to the Minimalists, of course – as a soloist, she’s doing some of the things that the Meredith Monk Ensemble did (minus the loopers), and there’s a feeling of the “discovered folk music” that Monk used in her work. Other moments have the quasi-Medieval sounds of Philip Glass — one track recalling the “Knee Plays,” other moments perhaps channeling Hildegard, in flourishes of modal monophony that underlie the writing. But this voice seems personal and intimate, centering on folk song round-style directness..” Peter Kirn CDM

“A little minimal, a little magical, a little chaotic and little bizarre. Live on stage. The craft of harmony and rhythm taken off the beaten track.. Risky live electronic music. Boxes, wires, instruments, pedals, and laptops … a platform for new sounds, collaborations and innovation.”
More info to follow